So I have one last thing that happened on vacation...

Earlier in the week I had gone out to a beach south of Blind Pass and I met another woman.  OK people, I'll tell you right now: it does not go that direction.  I'm good but not that good.

Anyway, we spied each other but kept our distance.  We respectfully kept our shell nets in own little area in front of us and played nice like two grown-ups are taught to do.  See, all that sitting around in Social Skills has paid off. 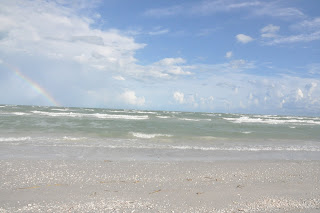 But in my mind it went a little something like this:  Shit. Shit. Shit.  She found the only good shell pile on this island and now I have to frigging play nice and share.  Damn it.  It wouldn't be so bad if this God damned island didn't decide to not give up any shells.  Maybe I'll bide my time here tonight and come back tomorrow.  Yeah, that's it, that's what I'll do.  It's a negative tide for God's sake.  You can bet I'll be back tomorrow.  Except earlier, way earlier.  I'm going to get here first.

And that's exactly what I did.

See, I planed our vacation around my shelling habit.  Sure, the kids like the beach.  But I like to look for shells and since I'm in charge of this whole operation we went to the beach that has shells.  And wouldn't it figure, the island wasn't producing any shells.

That and the negative tide bit.  A negative tides when the tide goes back into the ocean further than normal so you can get/see more shells.  Yes, I planned our vacation around that too.  So when I found this shell pile with this lady attached to it, there was no way I was letting go. 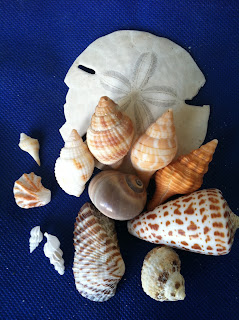 Turns out she's a kindergarten teacher and when she asked why I was out here shelling without my family, or anyone at all, I responded that I needed some alone time because of all the stress and everything else that goes along with having a kid on the Spectrum.  All the OT/PT, Speech, Child Psych and lets not forget all the extra fun that comes along with school.


She got it.  She understood.  And she was kind.

And that's why when she pulled an alphabet cone, horse conch or anything else I wanted out of the ocean I was not in the least bit jealous.  I was happy.

On this trip I came away with a lot more than shells.

And for that I am grateful.
Posted by Lizbeth at 8:04 AM

Email ThisBlogThis!Share to TwitterShare to FacebookShare to Pinterest
Labels: Momma-that's me, Sanibel, Thanks