It puts the lotion in the basket. And by basket I mean hair.

Right now we're in the midst of some trouble at school.  I mentioned it in my last post but it seems to have gone up a notch or two, or a thousand.  Alex has been sick in the mornings and he's punched not one but two children in the past two days.  And he's beside himself with worry.  Over what, I don't know.  I get his teacher being gone is a stressor but I'm of the opinion that something else is going on.  I'm worried sick about him and have pulled him from school yesterday and today as I feel the situation warrants it.  It's that bad.

I think I've come into my own with this Autism thing.  Never in a million years would I have dreamed I'd be pulling my kid from school for a few days.  I don't do it lightly.  I do it knowing it's what he needs right now.

So today I give you this, something that I did which brought me back down to reality and garnered more time in the shower, all be it with at two year old pointing at my ass going, "Jiggly mama, jiggly mama!  More jiggly!"

I had this great idea I'll share with you.  I thought of using all those micro shampoo and conditioner bottles from trips we took ages ago, like so long ago we're talking pre-kids.  That means some of these things have been hitching a ride in my bathroom for years.  Years people, years.

Which means I packed their sorry asses from North Dakota and moved them down here.

I don't know if they're even any good at this point but damn-it, I'm cheap.  We had them and I was going to use them.

Can anyone see the difference between the two bottles down there? 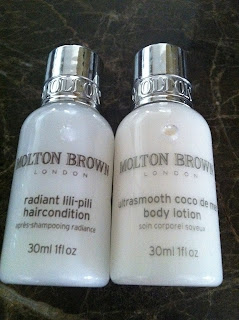 You can???  Good.  Then next time you can get in the shower with me and read it so I don't put lotion in my hair again.

And yeah, I just had a really bad visual of all of us in the shower trying to figure out what all those damn little bottles say.

You're welcome for that.  Now somebody pass the beach, I need to pour it in my eyes.


Note: I feel I should thank Grace for the way in which I wrote the title.  She talked like that in her last post and for some reason it's been stuck in my head.  I am also thanking Flannery for the Silence of the Lambs reference.  I believe in giving credit where credit's due, so thank you both.

Email ThisBlogThis!Share to TwitterShare to FacebookShare to Pinterest
Labels: Home life, Momma-that's me