So after sitting around all day Thursday bemoaning the fact there was not school, no schedule and Oh My God mom just made us put down our i-Touches so we could eat breakfast and we almost died, I was thinking we would just sit around and recover all day Friday.

My mom got a hair up her ass and decided to take the kids to Science City.  I was quite happy to sit around and recover all day Friday but noooo, that was not part of the plan.  I had to go too. 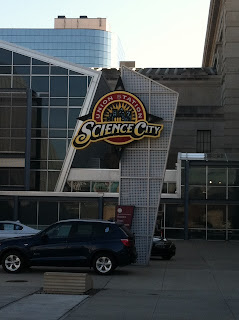 Since it was her idea to go, she drove.  Mistake number one.

After almost getting killed on the ride down there because Oh My God there is a truck next to me and Lizbeth's Mom doesn't like driving near trucks so she decides to floor it and damn near run us off the road but hey, we made it and since Lizbeth's Mom has a navigation system and because we have a navigation system it is synonymous for letting your brain leave the building and it says to turn but she can't turn and therefor she's going to STOP in the middle of the highway/road/intersection and wait patiently while it uploads our current position and we ALMOST DIE AGAIN but hey, we didn't die and my mom didn't hit the truck and no one killed us so in the end it was all good.

After a slight battle with having to rationalize to an eight, six and two year old that we all have to wear stupid arm bands and yes they are itchy, scratchy and will be pulled off as soon as we get away from the crotchety old volunteer, we all went in and Alex saw this:

In my delusion, I thought all of Kansas City had started their Spring Break...they did not.  I counted no less than twenty-two school buses parked off in the side parking lot.  To say it was crowded was an understatement.

And since most of the kids were in high school I had to have a quick sex-ed lesson with my own kids as to why so many of them were 'hugging' in the hallway by the restrooms and the kid cave.  Thank you teens of KC.  I really wanted to have that talk at the Science Center on Friday.


I threw in the towel when we found the water-current-table-thing.

We strategically did this last because I knew when we hit it we were not going to leave it.

Like a game of survivor we outplayed, outwitted and outlasted just about everybody in the joint to work this damn table.  My kids formed their own tribal council of three and for the first time in their lives they collectively worked together to eliminate new kids coming to the table.   I was proud and scared all at the same time.

It was like Vegas craps table.  My kids owned it and damn near charged admission.


For as long as I live I don't think I will ever get four pictures to line up like that ever again.
And then we all went home and we didn't die on the drive back.
To calm my nerves I made this cake and ate about half of it before dinner.
I don't remember what happened after that.  The rest of Friday has been erased from my memory.  That's probably a good thing.
Posted by Lizbeth at 7:59 AM

Email ThisBlogThis!Share to TwitterShare to FacebookShare to Pinterest
Labels: OMG, Someone shoot me, Updates