There should be a rehab program for people like me...

Time for me to dish about what we did on vacation.  Early on, Alex found a Monopoly game.  We played Monopoly for two weeks.  The end.

No really, that was about it.  From there on out, it was Monopoly all day, all night.  Sure we did other things, which no doubt I'll spill, but for us it was beach vacation spent mostly indoors playing Monopoly. 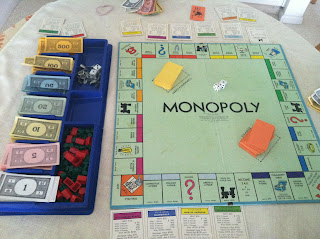 Alex kicked my ass every time we played.  Every Single Time.

Apparently I have a little money launderer on my hands.  At best, I've got a kid working out the finer details of a Ponzi scheme.

He'd set up houses on Boardwalk and Park Place and bleed me dry with all his damn rent money.  I wound up mortgaging my measly homes on Vermont and Oriental.  And that was when I wasn't in jail.

And do you want to know a secret???

I can't stand having to calculate how much money I get from bank after every transaction and how much money I owe in taxes.  Those Chance cards are a bunch of ass-hats and that damn luxury tax can go straight to hell.  Don't even get me started on that horrible douche called Community Chest.  And fast play?  What in the hell is that???

More to the truth, I hate that little cackle my son gets every time he sticks his hand out and waggles it around demanding his dang rent money.

When we were able to drag him out to the beach, all we were talking about was Monopoly, "Do you know it's my turn next, mom?  And do you think we can make a Monopoly game in the sand?  Do you know you've almost lost?  You're pretty close to losing, just so you know."

When we were biking, "Do you think the Monopoly game will be all right by itself?  And do you know, you only have $20 left?  Those odds are definitely in my favor."

Before bed, "It's too bad I beat you mom, maybe I should play with Dad next time."

And he did.  And for the rest of the trip he was happy.  He had some real competition and I had the Monopoly monkey off my back.

Everything was fine, till we had to go.  We had to leave the blessed game behind.  With promises of a brand new game, we headed back to Kansas.

As soon as we got off the plane and we got the kids settled at home, I went out and bought a Monopoly game.  Normally I don't go out just handing out toys and games for the kids, they have to earn it or something.  But you know, there are times when I value my sanity and a little peace and quiet and this was one of those times.  Right as the wheels hit pavement, he was asking for it and that's no way to live.  I bought that damn game in record time. 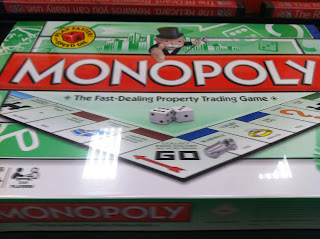 And you should have seen him.  His eyes lit up like a thousand stars when he saw it and he fondled that box in a way that made me slightly uncomfortable.

And now we have a new Monopoly game taking up space in the dining room.  He's still kicking my ass, demanding his rent money and cackling his way to victory.

Somehow I'm right back to where I started, minus the beach and shells.  I feel cheated, robbed even...and by my own kid.

I don't even know how these things happen....I mean, I get it in theory but really?  Really??  I'm over being beaten by my own kid.  He's enjoying this way too much.

Gaw, I hate Monopoly.
Posted by Lizbeth at 6:26 AM