It's Double Bubble at our house.

It's no secret that my son has anxiety problems.  He fidgets, bounces from foot to foot, gets up, sits down, gets up and sits down again.  He's in constant motion until he falls asleep.  Even then, he's rubbing the blanket to determine the texture and thread count.

I don't know why I was shocked when he started up with vocal stims.  But I was.  He had a bout with strep a while ago and from that he developed a habit cough which spiraled into a full fledged stim.  At one point he was up to over fifty coughs in under two minutes.  I stopped counting after that.

After school turned it into a complete cluster asking him to stop, to get a drink or eat some magic mints we went into habit reversal mode.  Step one: ignore the problem habit.  That's as far as we got.  The stim went down but not away.

He started to have other vocal noises--chirps, boops, squeaks, raspberries, beeps, you get the idea.  After visiting with our child psychologist, we came up with the idea to use gum to help with the stims.  Give him the gum to transfer the stim.

It seems to be working.

He has a preference though.  It has to be Double Bubble.  Not Hubba Bubba.  Is there a difference?  You bet your ass there is.  I made that mistake exactly once.  Double Bubble.  No exceptions.  So I've taken stock in Double Bubble and supplied the school with their own stock pile. 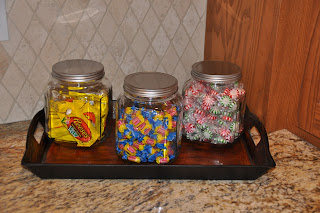 We did have one blip on the gum thing.  School has a rule and it specifically states: "No chewing gum on school premises."  We had to do some pretty hard work on letting him know it was OK for him to chew the gum while at school.
And he's going to need a mandible replacement at the rate he's chewing.  He's been averaging seven pieces of gum a day while at school so I've been bringing them in a new bag of gum every week and a half.

The noises are down and it seems to be working so I'll brave the eternal fires of hell (WalMart) to get his beloved gum.

For future reference, Target only stocks Hubba Bubba.  Yes, I was that desperate not to go to WallyWorld.

Don't judge me.
Now I'm off to get more Double Bubble.


Note:  I know I'm using terms loosely here.  Things such as stim, habit, tics.  Honestly, to me, they basically amount to the same thing.  Things he does to help block or filter stress or help calm him with his anxiety.  I've not put too much emphasis on what the correct vocabulary is but rather why he's doing it and how I can find the right way to help him.  Please excuse my lack of technical adherence on this post.


I wrote this a while ago and his vocal stims are still present.  He's added new ones such as rolling his bottom lip with his fingers and he's been twitching his neck, mainly on his left side.  He's recently added a vigorous head shake.  I know it's all anxiety related to school winding down as they decrease significantly after being home for the weekends.


We're all ready for school to be over soon!  Two more days, a week off, then we're taking this hot mess on the road to Sanibel.  Fair warning if you live in the vicinity......
Posted by Lizbeth at 8:50 AM