For about the fifth day in a row we've been under the gun in relation to severe weather. Tornados.  We had the town of Reading taken out by a tornado and the next day Joplin was wiped off the map.  Last night Sedalia was hit.

We had a another round of severe weather last night and today the sirens went off again.  At first I thought they were testing things but then realized it wasn't the first of the month.  I looked out the front windows and it was bright as day.  Then I went to the back of the house. 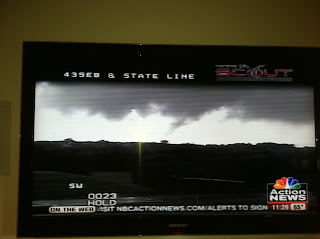 Grey, almost black, clouds hanging low.  Swirling.  Churning. Mesmerizing.  So close I could reach out and touch them.  How they were even suspended in the sky I don't know.

I went outside, on the back porch.

I ran back inside, grabbed the girls and took them to the lower level.  Put them in the back closet and let them play.  Turned on the TV and listened.  A tornado.  It was going up State Line, past such and such street.  Jumped over to Napier.  Going north.  I stood still.  That was us.

It was aiming for us.

I didn't believe it.  It wasn't computing.

I went back outside.

The clouds, so close.  So black.  Nebulous wisps.  Shifting.  Angry.  Moving.  Rotating. The sky rumbling, churning, full of life.  I could feel static in my toes, traveling through the ground and up my body.  Trees blowing and bending with such grace.  Such force. Groups of leaves being plucked off and sent flying. 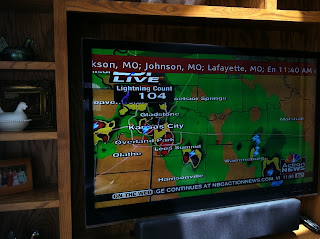 It was rotating above me.  Sirens blaring, screaming this time, yelling at me to get inside.  The trees still bending only this time rotating with the blackness.  It was stunning.  Beautiful.  Dangerous. The wind was howling, taunting me, "Run.  Run now little girl or I'll get you. I don't discriminate."

I fled.  Scared.  Knowing that even the basement was no real protection.


And just like that it churned by.  As quickly as it came, it was gone.


The birds started chirping.  The sky went back to blue.

Like a ton of bricks it hit me: Alex. Oh My God, Alex.

He was at school.

I was shaking.  For thirty five eternal minutes I waited.  Pacing,  Still shaking.

I received an e-mail notification.  The kids were safe.  They were evacuated downstairs and stayed under the lunch tables in the cafeteria for over an hour.  He did what he was told to do.

I brought him home and I had all my children with me.

That's all I ever needed.

Then, and only then, did I stop shaking.


Note: At dinner that night when we were talking, I asked Alex how things went at school to see if I could elicit what exactly happened and if he was OK with things.  This is what he told me: "Mom, it was great!  I finally got under the tables to see how they work!"

Email ThisBlogThis!Share to TwitterShare to FacebookShare to Pinterest
Labels: Home life, Momma-that's me