And then we tried to play golf.

I went in yesterday to talk about Autism with the children in Alex's class.  This is not that post.  That will be on Monday.  I had problems linking Power Point to Blogger so it will have to wait till Monday.

Over the past weekend we took the older two out to the driving range to chuck some balls.  Alex has been practicing golf in the back yard for a while now and while I don't worry about balls flying and smashing windows, I am getting a little concerned with the gaping maws he's putting in the yard.  You have to understand that for every ball he hits, he wiffs about five.  That means I have five brand new chunks of grass/dirt/mud to replace for every one he hits.  Lets just say I have a shitload of holes in my yard right now.

Anyway, we decided to up the ante and go to the driving range.  Now, I'll be the first to tell you we live in a stuck-up, snotty, fake boob, my ring's bigger than your ring kind of neighborhood.  I think its funnier than hell and oftentimes I wind up staring at their fake boobies, trying to figure out why the nipples don't line up and how on earth can she walk with yoga pants stuffed that far up her crack?

That's the kind of girl I am.

Anyway, we went to the driving range.  It was outside, so we were using our outside voice.  Our really loud, Oh My God I'm so excited to lob a few balls in someone else's yard and OH MY GOD, there is a machine that gives you balls?!?  HOLY COW, Dad you gotta come and see this voice.  That was the kind of voice we were using.


And then I looked over to the driving range to see everyone staring at us.  Every Single Person.  Clearly we'd not gotten the memo to shut the frick up while at the driving range.  And do you know what I did?

I smiled back at them, at every single one of them.  I didn't explain a thing, I just let it be.  I'm to the point that if I say anything, or try to explain away his behaviors, I'm lessening him, I'm devaluing him as a person and I won't do that. 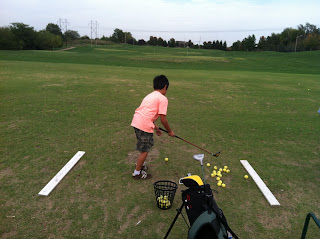 I just smiled at the people and quietly explained to Alex that we have rules at the driving range and one of them was to use an inside voice outside.....I'll save you the dialogue that everyone heard but suffice it so say it made no sense to him.

Honestly, I say can't blame him.

He was so excited, he was having such a good time.  He couldn't believe there was such a thing as a golf ball dispensing machine and he was trying to figure out if the mechanisms were similar to a pop machine.

There was one husband and wife duo who were looking at us like we were devil spawn incarnate.  The thing is?  She got it right away.  She understood the extra time we were spending with him, telling him how to hold the club, how to bend and how to use a inside voice, outside.  She got it.  He...well, he didn't.  He kept staring at us.  Giving us nasty looks.  Sighing and Humphing like he was beyond put out.  He was The Angry Man, as that's what we called him for the rest of the night.  His wife was embarrassed and at one point hissed at him, "Would you knock it off?  I'll explain later but just please stop."  He didn't get it and he didn't stop.  She just smiled apologetically.


We lobbed balls and we missed more that we hit.  I may have ducked several times from flying clubs and I may have said, "OUCH, GAWD...Please don't use the club again to get my attention.  Clubbing shins is not OK."  I may have said that out loud while hobbling around limply.

There is something about giving your child, who has limited gross motor skills, basically a three foot metal arm extension called a golf club.  His range of motion/destruction is increased to about a five foot circumference around his entire body.  I think the only one who had more adrenaline coursing through their body than me, well, that was The Angry Man.

I may have also said, "DUCCCCK" as a club or ball when flying several times....

And then we came home.  The Angry Man was forgotten.  And for once, I let someone else put the plugs of dirt/grass/mud back where they belonged.  I really would have liked to put them back but in my defense, some of them were lobbed so far out, they went further out than the balls.  I was not going to risk getting hit by a ball from The Angry Man.  He was just that pissed.

And as we left, Angry Man's wife gave me one last smile and a small wave.  In that split second our eyes connected there was understanding, kindness and compassion.  I smiled quickly back and went back to the kids.

Revenge is sweet though, I suspect when he got home, his wife was gave him a club or two of her own.  By the time we were through, she was even more pissed than her husband.  He was so mad at us he didn't see what was right under his nose.


Note: I have to tell you a little bit about how things went at school.  I was nervous as hell but it was AWESOME!  I'll post on Monday (with the PPT that I made into a booklet, so its available) but the big takeaway was the kids finally had a reason for his weirdness, if that makes any sense.  It was such a relief to see some of their faces---they understood why he chews his shirts, uses headsets, takes breaks or just flat out walks away.  They understood.
Posted by Lizbeth at 7:15 AM