I'm going to be shark bait.

I did the unthinkable, called the husband at work and begged, pleaded and then demanded he come home and help me out.  I may have suggested I was going to throw myself out an upper window, or something that drastic, to get his attention.  I may have put that suggestion into his head, I don't know.  I was exhausted, I was feverish and I was quite possibly hallucinating.

And I may have thrown a fit like a two year old asking, begging, pleading that he please go to Walgreen's and get antibiotics for all of us or I may throw myself out that same upper window again.  Now to be clear, if I did throw myself out that window I'd land in the bushes, probably break an arm, or some other extraneous appendage, and then I'd still have to clean the kitchen and make dinner because the fall would merely maim and not completely do me in.

Anyway, in my delirium and feverish state I may have said something along the lines of, "I need a break.  I can't do this.  I can't have you sick people all needy and depending on me when I'm sick.  Why, why, WHY, can't our kids just sit in front of the TV?  Why can't anyone just eat a regular pizza and not puke?  And WHY is it so frigging cold in here?"

To which my patron saint of a husband had the stones to say, "Hon, it's not cold in here, you're burning up." And then, thinking I was more lucid and in a more adventurous mood than I really was, he said, "I can't help if the kids got your genes and don't like pizza."

In hindsight I know he was trying to be funny but trying to be funny with your wife who's not showered in three days, handled more puke than necessary in any one lifetime, and has been without sleep and sick herself for the last week was probably not in his best interest.

No, I know it wasn't in his best interest.

And that's where I snapped.

"I can't do this.  I need a break.  I'm sick.  I can't be in charge of everything when I think there is a pony in the kitchen and can't you empty the damn dishwasher?  And for the record, I do not have bad genes.  They come from your family!"

I said a lot more than that but it was all nasty, mean and not necessarily true.  There was no pony in our kitchen.  My husband backed out of the corner I put him in and the next day surprised me by saying, "I've worked it out and we're going away for a week.  No kids, no nothing, just you and me."

And for a brief moment I was happy, I had an out.  I knew there was an end in sight.  And then I asked him, "When are we going?"  Knowing that one week out of four were pretty good odds but still... 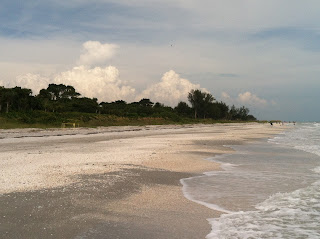 And as it turns out, we're going down to Sanibel.  For one solid week, we'll have no kids, no nothing, just the two of us.  And one tag along bag full of tampons, pads and pain killers.

Wait.  You don't think that was his plan all along, do you?

Email ThisBlogThis!Share to TwitterShare to FacebookShare to Pinterest
Labels: Home life, Sanibel, Someone shoot me, they're sick