I have been bested by Minecraft.

It's no secret our new thing in this house is Minecraft.  We held out as long as we could but we finally caved at Christmas.  Santa brought the kids Minecraft.  It was quite a letdown because all we could wrap was an envelope with the authorization code that needed to be entered into the computer to get the game started.  Once they figured it out though they took the envelope and ran with it.

We never saw them for the rest of Christmas.  Come to think of it, we saw very little of them in January, February and most of March.

Since then, we've been up to our armpits in Minecraft.  Every single thing in this house revolves around it.

And that, right there, is the rub.

We've had to find a happy middle ground where the kids are not plugged into the computer all day and life's passing them by.  They, on the other hand, would love to do nothing more than fight zombies and creepers, download mods and watch YouTube videos.

Truth be told, Minecraft is just one little part of the Total Minecraft Immersion.  You have mods, seeds, whole new worlds and maps.  All of them have to be thoroughly researched and examined on the iPad and then you chose which ones you want to download.

And you have not lived Minecraft till you've lived through the videos.  Oh dear God the videos.  They are a thing unto themselves.

We started off with these prepubescent teens, screaming, yelling and cussing every other word.  They would blow up sheep and use TNT and nuke whole damn worlds.  My kids were enjoying it a bit too much so that lasted less than two seconds in this house.

Then we found Mr. Paul.  He's the new man in our lives.  He's practically been living with us since right after Christmas.  His real name is Paul Sores Jr, and I can't tell you the number of night's I've spent with Mr. Paul, waiting for my own husband to come home.

He does the Minecraft videos in a nice, calm manner and he's downright easy on the ears.  That may not seem to be a big deal but when you are listening to these things for hours on end sometimes, voice quality becomes very important.  Trust me on this. 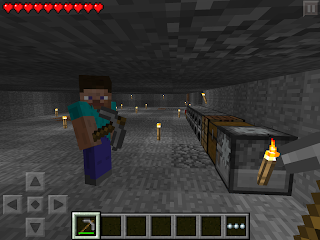 It got so bad at one point, I called the kids to come up and eat dinner.  They wolfed their food down in seconds. SECONDS.  Then, before I had had a chance to sit down to eat my dinner, I was being asked, "Mom, can I go back downstairs?  Can I, please?!?"  I brushed it off figuring if I ignored the question, I could at least get a little something to eat.

"MOM, can I go back down stairs?!?"  Alex asked almost frantic, pacing, having to have an answer right that very second.

"Guys, I need something to eat.  Please look around you and put your dishes away.  Just give me a minute, would you?"

Well that wasn't even out of my mouth before my cute little kids with absolutely no gross and fine motor skills, found it within themselves to scoop up their dishes, round the bend of the island, turf the dishes into the sink, round the other bend of the island and with the dexterity of a skilled surgeon, set the microwave timer.

All in under ten seconds flat.

I remember standing there thinking, "What in the fuck just happened?  Jesus, I don't think I've ever seen them move that fast, Alex was almost fluid, even.  I could really use this Minecraft thing to my advantage."

And then it dawned on me, "Hey, why did you guys set the timer?"

"Well mom, you said to give you a minute.  I'm giving you exactly one minute.  Well, you now have forty-six seconds."

So I stood there looking at my older two kids, all of us looking at each other, a three way stare down, going back and forth from looking at them to the microwave timer and back.  I never knew how excruciatingly long a minute, or forty-six seconds, could be until you're in a stare down with your two kids and the microwave.

And just like that, my older two ran like they had flaming fireballs on their heels, down the steps to the computers, back to Minecraft.  One of them ran around the corner, overshot it and smack-landed in the other side of the wall.  They righted themselves and kept right on going.  I could hear them in excited voices, "Hey lets see if we can get new saddles to ride the pigs!"

Gracie and I stood there looking at each other, wondering what in the hell just happened.

I stood there trying to figure out why in the hell a pig needed a saddle. 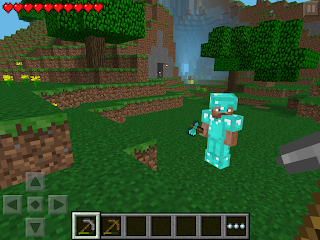 And that is one day in our life, living with Minecraft.

And I still don't know why a pig needs a saddle.  I did find out you have to have a carrot though.