Those were the first words my daughter uttered when we came back.  Promptly followed by bursting into tears, sobbing and running to her bedroom.  And I was right behind her.
Why does coming back have to be so depressing?
So we made it back from vacation all in one piece.  I had to stop posting for a bit as the connection was so bad that it just wasn't worth trying and getting all worked up, angry and bent out of shape.  It was a vacation after all.
That and to be brutally honest, I've not had the time to write and when I have, I've had absolutely nothing to say.  Nothing.  I mean, crazy stuff has been going on, I've just not felt like writing about it.  Guess coming back home has been a bit hard on all of us.
In between coming home, unpacking, laundry, getting food, birthdays, doctors and dentist appointments for the kids, contractors and painters, I've been left with zero time.  During the school year, I had a two hour window where I could get things done with the baby hanging around at my feet.  Not that I really got anything done but it was my time.  My time to do, or not do, with as I pleased.  It's becoming painfully obvious that with all three of them home for the summer, my own time has shrunk down to nothing.
Anyway, here is the fun we had on Father's day. 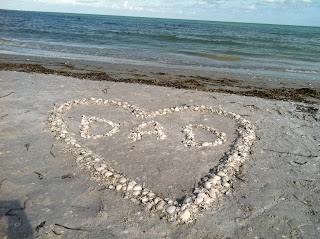 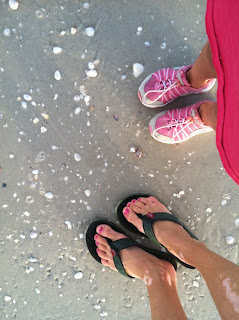 Don't look too closely at my toes.  That's what happens when you have a five year old paint your toes, feet, legs, upper arms...notice she has her shoes on?  That and you can see all my white spots.  Sexy.  Dead sexy.
Note: In relation to my last post, my mom sooo does not read this blog.  If she did, I'd have this thing shut down faster than a cover-up for an for an OSHA violation.  I mentioned her tree hugging, granola, I've been in the wild with no razor for years look as it was the third time I had to correct that particular problem.  Maybe that's why I've not had much to say....
Posted by Lizbeth at 7:58 AM