This is the fish tank where I got yelled at for pulling a sea star out of the holding tank for less than 0.0034 seconds and where everyone within earshot was told by Alex, "This was not my activity of choice.  I have no interest in sea life and I would be much happier with my I-touch but ohhhh nooooo, mom says it has to say at the condo." 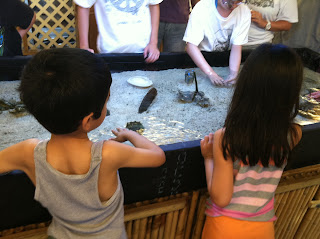 This is the boat we went on where I lost Lizzy, Gracie threw her bottle out and screamed her head off for the duration and where Alex got a brain contusion from hitting the boat decking as the captain ran into the pier.  Read all about it here. 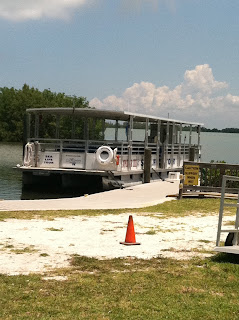 OK, there would be a picture of a boat here but this piece of shit computer I'm working on is a little mother and won't let me add a picture without first rotating it and then adding it sideways.

That and it's so God dammed slow I can't even get to a single one of your blogs without crashing the whole system.  I think I take out power to half this island when I try to comment.

And I have an I pad but that's not really an accurate statement.  I can see our I pad but can't use it.  I may be able to wrestle it out of my son's hands for twenty seconds only to have to barter later usage.
Scratch that.  I figured things out.

This is one of the sand castles Alex made and has announced to the free world and anyone who has the misfortune to walk by that, "This is my sandcastle and I would appreciate it if you would walk around.  Thank you.  Oh yeah, I'm not enjoying this activity at all.  I would like to be playing with my I-touch but my mom says it has to stay in the condo." 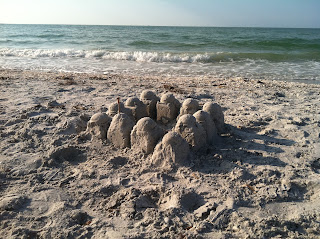 Since we're outside he's saying all of this in his Loudest Outside Voice Ever.  Technically I can not correct him since we are indeed outside. He has reminded me of this fact.

And this is a picture of our walk to the beach.  All you have to do is add three children, all screaming different things, getting chased by wasps and all sorts of big flying bugs, pushing and shoving to get to the water then the picture is complete.  Thank you condo association for putting flowering plants along every walkway.  By the end of the boardwalk I've been given all the beach toys, towels, sunscreen and drinks so I look like a camel on a desert trek. 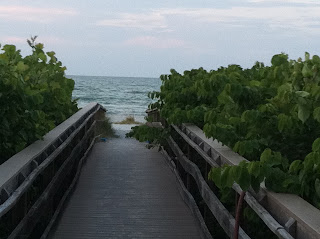 I've taken to stashing a bottle of alcohol in a beach towel.  It is my goal to have one bottle finished per day by the end of our trip.

Yes, you may judge me.

And that is all I have for today.

Note: I have been desperately trying to get to your blogs but this system here is nothing but smoke and  mirrors with the ability to crash at a moments notice.   I may resort to posting some old crappy posts I've had hibernating till we get back as I've spent more time trying to keep this system running and my kids from getting electrocuted from the mess of wires under the writing desk....
Posted by Lizbeth at 7:57 AM

Email ThisBlogThis!Share to TwitterShare to FacebookShare to Pinterest
Labels: Holidays, It's hotter than bison balls down here, Sanibel