And just like that, the door's been slammed shut.  The Red Robe is back.  I'm sure she was sent back like a Christmas package, red bow and all, with my brother singing "It's the most wonderful time of the year" as he waved bye-bye and see ya later at Logan's drop-off zone.

The bar stool has been commandeered and I'm once again being watched, followed, and generally irritated.  We have a snow day with the kids today and while we were outside sledding, I actually looked up at the house and she was staring out at us.  Didn't want to join us, but was content watching from the sidelines. 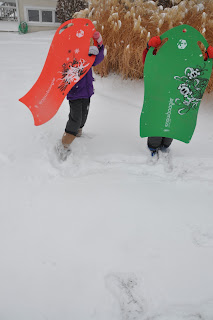 No, she's not peering out of those windows...she's right above in the kitchen.  I didn't realize what was going on till after I took the picture.  After we came in, she again, just stood and watched us take off all the coats, snow pants, etc.  Alex looks at her and goes: "What? What??"

Part of me wants to tell Aspie to knock it off and another part of me thinks it's hilarious that he can see so clearly what's going on.  I don't want to take advantage of some of Alex's Aspie traits, like repeating what he hears and being brutally honest, to solve my problems but the thought is secretly very appealing.

Now I'm now walking around my house with all sorts of pent up rage and anger.  Quite the opposite.  I've taken more of a "in your face" kind of approach and when she's staring at me, tries to do what I'm doing or asks a ridiculous question like: "Where do we keep the chicken?"  I ask what she's doing and why.  I am usually met with a huff and silence.   Like right now, for example, she is literally standing behind me watching me type.  I've asked what is going on and the answer is nothing.  Like, dead air.  She didn't say anything.  So here I type with, wait for it, there's the huff.  Now silence.  She's walking away.  And she's back again.

I think I'm going to get the kids and go outside again.  I like it better being on the outside of the cage.  At least that way I can't hear the huff.
Posted by Lizbeth at 12:05 PM