The mother of all surprises...

﻿
Alex's teacher walked out with him on Friday after school and met me at the flagpole.  Not his para, his teacher.

Shit.  What did he do?  What happened?  What was misunderstood or misinterpreted??  Lord, please tell me it's not too bad...

I've talked about the pit of fear that wells up in my stomach when his teacher comes out to met me.  Read about it here and come back.  Usually his para walks him out and when it gets bumped up to the teacher it only means one thing:  Trouble.  I braced myself for what she had to say and was trying to estimate how many cookies I had to bake to get back in her good graces.

And I was given the mother of all surprises.

She told me he did great with his Origami presentation and they want to use the video and broadcast it throughout the school.  She was so proud of him and he was beaming.  For a moment his tics were silenced.  He was thrilled.  Proud.


What?!?  Presentation?  Origami??  What in the hell was she talking about???
I had no idea he was doing a presentation, let alone one that was to be videotaped.  Mrs. T had to talk to me nice and slow because I was standing there looking thoroughly perplexed.
Here's the skinny:  Mrs. T asked Alex on Monday if he wanted to to teach the class how to make Origami cranes on Friday.  He said "yes" and didn't say a word to me.  I was stunned.  Not that he didn't tell me, I never get information out of him about school, I'm used to that.  But about the fact he was teaching other kids how to do Origami.  That was his "go to" thing back in September and he moved past it around Thanksgiving and he's not looked at it since.
This past week he's not uttered a peep about his teaching assignment and he's not looked at any of his origami books.  At all.  He got up in front of his class on Friday morning and taught them how to make a crane from paper.  Stone cold, from memory, from about six months ago.  Amazing. 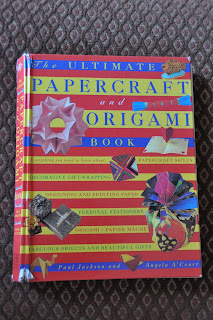 So Friday, I got one of the best surprises I could ever get.  My little one did something that he loved and he excelled, so much so that his teacher came out and was gushing all over him about it.  Gaw, to see his face, it was priceless.

My face on the other hand was a horror.  Of course I started to well up and when that happens I get all red and blotchy, like I've been stung by a  squillion bees, and I get all snotty and teary and ugggh, you get the idea.  Not pretty.
But Alex's face?  That was a thing of beauty.
Posted by Lizbeth at 12:56 PM