I got called on the carpet by my kid's Speech Therapist today.  We were supposed to do some homework and I forgot.  For two weeks in a row.  So this time she told me that in order for us to succeed we needed to be on the same page.
BITE ME.
Now that I got that out of my system, I get it.  Really I do.  I know I'm an integral part of this whole gig.  She actually gave us a little booklet at our first meeting and it says: YOU.  It is up to YOU to implement your child's Speech Therapy services."
No, we didn't get a booklet, I just made that up.  But it felt like we should have gotten one as she seemed to be quoting some Holy Grail of Speech Therapy that I was missing.
We were supposed to be working on his R's.  He says them incorrectly and you can't understand him.  I get that.  Thing is, he wasn't associating the exercises with articulating the appropriate sound and he was getting frustrated and embarrassed.  I put a limit on what we were doing at home since it was turning into a negative association.
And the other things, yeah, I dropped the ball.  The two girls have been sick as dogs, producing more mucous than I ever dreamed possible.  I've been relegated to mopping up puke for the past week, doling out Tylenol and Ibuprofen like a Pez dispenser and running to the Pediatrician's office since the sweet little shit of a baby seems to think it's much more interesting to fight like a feral cat and see mommy wipe up antibiotic off the ceiling, walls, microwave and any other inanimate object within a ten foot range.  And since she's got more fight in her than Rocky Balboa she crossed the line and puked all over the other half of the kitchen.  Again.

I even have puke buckets in the car.  Yeah, it's that bad. 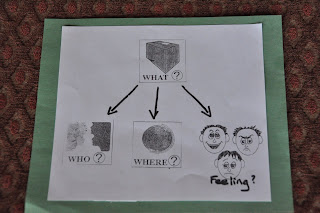 So NO I've not yet used our conversation starter at the dinner table asking who did what, when and why.  Been a little busy. 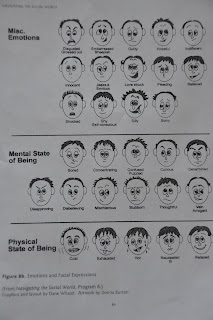 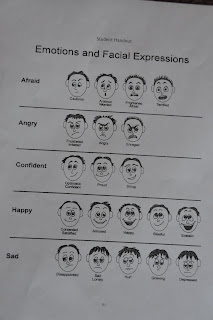 And NO I've not used our Emotions and Facial Expressions Chart.  I think its still in the car from last week under a puke bucket.  If I did you can bet I'd have had a witty comeback like:
I'm a little irritated at what's going on at my house right now.  I'm terrified of getting dinner launched at me.  Pick an orifice.  I'm enraged and disgusted with the prospect of cleaning up more puke.  I'm exhausted, nauseated and sick to death of hearing my own children whine and beg.  And if I hear that God forsaken Lelli Kelly shoe commercial one more time I'm beyond confident I'm going to burst a vessel.
But I am ecstatic that you are concerned with our progress and amused by your disapproving and indifferent attitude and I'm optimistic that smug grin has been wiped off your sorry little face.
But alas I had no witty comeback except for BITE ME and even that was only in my head.  That should count for something, right?  Right??
Posted by Lizbeth at 9:51 AM