The mystery of the pine cones.

Over the past several days I've noticed strange things coming home in Alex's pants and coat pockets.  He's been bringing home pine needles, pine cones and the seeds from the cone.

I pulled a pair of pants from the washing machine and out fell a bunch of pine needles.  I found pine cones in two other jackets, the pockets stuffed full.

I asked him why he didn't go to his para or teacher for help and said he couldn't.  If a disagreement was a "small thing" the kids are supposed to try and work it out themselves.  Fair enough.  Under normal circumstances I actually think that's a pretty good policy.

I pushed him a little further and said something like, "But you told her you were playing with them and she took them anyway, that doesn't sound small to me..."  Honestly, it sounds like she was bullying you, that little hussy.  I kept my mouth shut on that last part.


The pine cones were small and therefore couldn't ask for help.  Such a literal interpretation of the rules. 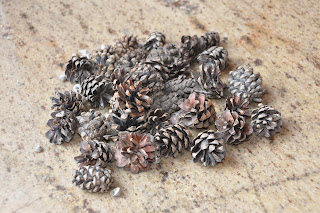 The next day I was in his resource teacher's office (I swear I think my car could drive there itself sometimes) explaining the situation.  We have it all worked out now, but it just goes to show how something so simple can be misconstrued or misinterpreted.   How literal and rule bound he is.  How he held on to the other child taking his things and he did what he thought best which, honestly, was not the best thing to do at all.  It shows how vulnerable he really is.
I've not seen any more pine needles or cones come home yet.  I'm off to check the backpack...
Posted by Lizbeth at 7:13 AM